With all the Covid restrictions, it was a very slow year for Diptera recording. The Northants Diptera Group did not meet at all during the year, although individual members did do some recording on their local patches and a little more widely when restrictions were relaxed.

As mentioned in the April 2020 blog, the dotted bee-fly Bombylius discolor extended its range  in Northants  but I have had no further reports since the ones for Sywell Reservoir and the Daventry area.

With limited ability to get out, I worked through a lot of samples of flies taken in flight interception traps in 2018, and subsequently stored in alcohol. The traps had been set up primarily to find saproxylic beetles at Yardley Chase but I hoped some interesting saproxylic flies might also be present. Many of the specimens were in poor condition and not identifiable to species level and most of the ones I could identify were common species. However, one cranefly turned out to be Nationally Scarce - Rhipidia uniseriata. This is a saproxylic short-palped cranefly, family Limoniidae and this record is a county first. It was not in great condition but was clearly identifiable. The two attached photos show the key features. 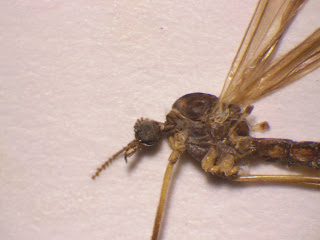 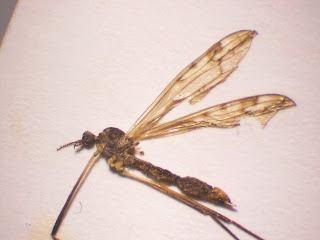 Rhipidia uniseriata showing the wing blotching with no blotches close to the body
Three locally scarce soldierflies were recorded during the year. Stratiomys singularior, the Flecked General, was swept at Yardley Chase (John Showers) and a second one was photographed at Summer Leys (Robin Gossage). This species is normally associated with saltmarsh but has been increasingly found inland in recent years. Stratiomys longicornis, the Long-horned General, was photographed  near Daventry by Beatrix Jackson. This is only the second record from Northants and is another species associated with coastal marshes.. The third locally scarce soldierfly was Odontomyia ornata, the Ornate Brigadier. One was found as a larva on Yardley Chase and reared to adulthood by Graham Warnes and another was photographed in the Nene Valley by Robin Gossage. It is associated with coastal grazing marshes with water-filled ditches. It is interesting that all three species have been associated with coastal areas and that all three are being increasingly found inland. It may be that climate warming is allowing the species to tolerate a wider range of habitats. 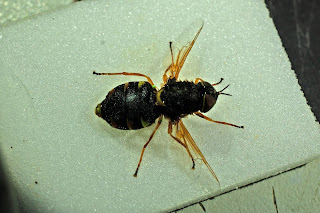 Odontomyia ornata, the Ornate Brigadier (Graham Warnes)
Yardley Chase also provided a record of the long-bodied cranefly Diogma glabrata (Family Cylindrotomidae). The species breeds in moss in damp woodland. This is only the third record for Northants. Also at Yardley Chase a search of a recently cleared pond in October resulted in finding a colony of the short-palped cranefly (Family Limoniidae) Erioconopa diuturna. This is another county first. Although the species is widespread in Britain, its late flight season and tendency to prefer higher, wet pastureland, probably means it is overlooked.
So, despite the restrictions caused by the lock-down, the season was not a complete write-off. I look forward to the warmer months and easing of restrictions so that we can get out and continue to find and record interesting species throughout the county.

Posted by John Showers at 08:02 No comments:

With the current lock-down, fly recording has been pretty slow. However a few lucky folk have seen dotted bee-fly Bombylius discolor on their local patch this year. Sites where it has been recorded are mainly in the South-west of the county within the range of last year’s records. However one significant change is a record from the Mears Ashby end of Sywell Reservoir by Jim Dunkerly. This is much further North and East of all the other sightings and may indicate a further range expansion.

On a personal basis, I have recorded very little this year outside of my garden. I did photograph a Cheilosia vernalis on the edge of an overgrown ironstone quarry near my house. All the bee-flies I have seen have been dark-edged but still hoping.
Posted by John Showers at 03:07 1 comment:

Since the report of dotted bee-fly Bombylius discolor from Tim Pridmore at Farthinghoe, he has seen another at the other end of the reserve. Also David James has reported one from Salcey Forest and Kate Colles has sent me a photo of one from her garden at Upper Boddington. Chris Colles has sent me a photo of one from Upper Boddington churchyard taken on 19th April 2018, making it the first record for the county. Clearly the species is established in the south-west of the county b ut how far north has it reached? Keep a look out. I have not found it yet at Pitsford Water or Yardley Chase.
Posted by John Showers at 09:22 No comments:

March is usually when dipterists become active again outside and start looking for those early flying flies. Several reports of early Marmalade Hoverflies Episyrphus balteatus have been received. Also the daffodil leaf-mining scathophagid Norellia spinipes has been seen at several locations. The dark-edged bee-fly Bombylius major really got going on 24th March and has been reported regularly from around the county. However more records are needed as it helps us track not only where it can be found but when it is on the wing.

Today (30th March) I received an email from Tim Pridmore, the warden at Farthinghoe Nature Reserve. He saw and photographed the much scarcer Dotted Bee-fly Bombylius discolor at the reserve. This is almost certainly the first record for Northants. In flight the two species are almost indistinguishable but when perched the dotted wings are quite clearly different from the dark leading edge of the dark-edged bee-fly. Tim kindly sent me the photo he took and gave me permission to place it here. So make sure you get a good look at bee-flies as there might be more about. 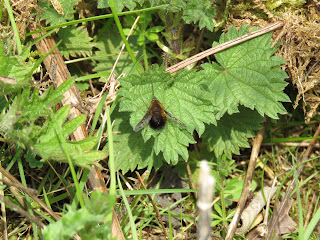 I apologise for not posting anything here for some time. Very remiss of me. After a cold and wet start to the Spring we moved into a period of warm weather before things started to get very warm and dry. Generally British flies like mild dampish conditions and do not cope well in either the cold and wet or in prolonged hot, dry conditions so this year has been a mixed bag from a recording point of view.

The warm weather in May and June did produce a large emergence of our local comb-horned craneflies Dictenidia bimaculata and Ctenophora pectinicornis. In most years I get one or two records of these species at best but this Spring I had records from new sites and a very large emergence at Yardley Chase. They have the common name "comb-horned" as the males have antennae which bear two rows of branches, like the teeth of combs. The cranefly larvae live in rotting wood in mature trees, often high up in branches. The adults are occasionally seen near the ground after emergence. The comb-horned antennae are thought to be an adaptation to allow the males to find females by detecting their pheromones. In the tree canopy sensitive detectors would be needed to find a mate.

The reason for the sudden increase in records is probably down to the tendency for these insects to emerge in warm conditions. 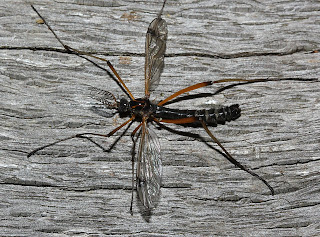 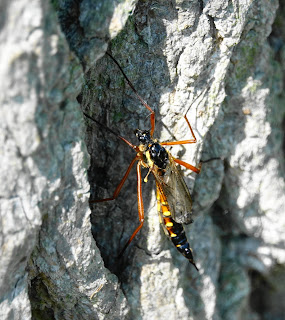 Ctenophora pectinicornis female. This mimics a wasp but the projecting spike at the end of the abdomen is harmless. It is the ovipositor for laying eggs.

Neither species is very common. They are best looked for near ancient trees with rotten branches in woods or parks on warm days in late May and June. They often rest on tree trunks or nearby vegetation. Photos of them with details of location and date would help us find more sites for them. There are a few other comb-horned craneflies in Britain, some are extremely rare, so do try to photograph any you may come across. Photos can be posted on the Facebook WILDside Project Group.
Posted by John Showers at 13:56 No comments:

There are two workshops coming up that may be of interest to dipterists.

On Saturday, 12th May, John and Barbara Ismay and Jann Billker hold an Acalyptrate Clinic in the Collections area of the Oxford University Museum of Natural History. It is from 10 am to late afternoon. They will help you with the identification of Acalyptrata families (Diptera)  to family level and many of these to genus or species. Please bring a few specimens that you find difficult or would like confirmed. The clinic is restricted to a maximum of 8 participants, so please let John and Barbara Ismay (schultmay@insectsrus.co.uk ) know if you would like to come. It would also be useful if you could let them know which families you are interested in. They will also bring some draft keys to smaller families that you could use.

I shall be holding a workshop at Pitsford Water on Sunday 22nd April. This will consist of identification of pre-pinned specimens and some field work. The balance will depend on the weather and attendees preferences. This is part of the WILDside project and attendees should contact Ryan Clark at the Northants Biodiversity Records Centre to book a place. The aim is to provide people who have already attended a fly identification workshop some practice as the season gets started.

Posted by John Showers at 23:39 No comments:

The cool, wet weather of late has not been great for fly hunting. However, there seems to be more fungi about in the woods and this could be good for those flies that breed in the fruiting bodies of fungi.  There are several families of flies that do this and some are fairly elusive as adults. Platypezidae is a family that I hardly ever come across so I will be looking out for these over the next few weeks. One way of finding them is to collect some fungus and keep it in a box with ventilation and see what emerges. Apart from flies a number of saproxylic beetles may emerge.

I briefly visited Pitsford Water, Holcot Bay yesterday to look for suitable sites for a fly identification workshop tomorrow. The workshop is one of a series that the Northants Biodivesity Records Centre is running under its WILDside Project. The project is aimed at encouraging more people to submit records of wildlife to the centre and to develop skills for the next generation of recorders.

Before I was driven off by a heavy shower I noted some flowering ivy, always a good nectar source at this time of year. Two attractive hoverflies were visiting the flowers - Myathropa florea and Volucella zonaria. The latter is our largest hoverfly and has the common name of hornet hoverfly because of its close resemblance to and association with hornets. It only arrived in Northants in the mid 2000's but is now reported quite frequently, especially from gardens growing Buddleja. 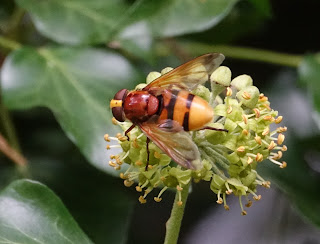 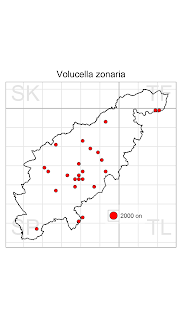 Distribution of Volucella zonaria in Northants by end of 2015.
Map kindly supplied by Stuart Ball of the UK Hoverfly Recording Scheme.

Whilst at Pitsford I examined the trunks of poplars, especially those that had been felled, looking for flies associated with rotting sap. I did not find any on the trunks but sweeping adjacent foliage produced two specimens of the cranefly Gnophomyia viridipennis. The larvae of this fly live in the sap layer and especially favour poplar. The adult is distinctive as it is one of the few all black craneflies and has bright yellow halters. There were no records in modern Northants up to last year, although it had been recorded in the Peterborough area of Vice-county 32, the historical area of Northants. I found it last year at a log pile in Sulby and had found it on the Holcot Bay poplar log earlier this year. So yesterday's find was the third county record. 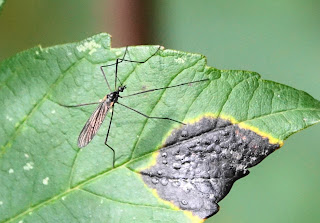 The UK distribution map can be found on the NBN Atlas here: https://species.nbnatlas.org/species/NBNSYS0000008180